He falls in love with a paper ballerina and incurs the wrath of a frightening jack-in-the-box troll. Falling from the window, the soldier is eventually swallowed by a fish. Mixed-media illustrations accompany this retelling of the tragic fairy tale. The mitten is found by a delighted squirrel who enjoys its cosiness until a first a rabbit, then a fox, and finally a bear beg to join in the warmth.

When the coat wears out, he alters it into a stylish jacket, a snazzy vest, and finally a stylish tie. This joyful rhyming version of a Yiddish folksong shows grandfather restyling his beloved coat through four generations.


Lady Margaret Mountjoy is in denial, and Jane 15 and Maude 13 tend to the livestock and chop firewood, making them look more like peasants than proper ladies. Then Lady Mountjoy suddenly remarries, presenting her stunned daughters with a new step-father and a pampered new stepsister Isabella 13 who treats them like servants.

Set during the Harlem Renaissance and featuring a mysterious magician from the Caribbean, this spell-binding tale is illustrated with beautifully detailed oil paintings.

After they depart, a Silkie hen arrives to transform Cinders into the most beautiful pullet at the ball. Framed as a dream by an 18th century Russian girl, this re-imagined fairy tale is as elegant as it is enchanting. The Turnip by Jan Brett Ages 3—5 A badger family discovers an enormous turnip growing in their back yard.

As the first snow begins to fall, they try to pull it out of the ground to take home and cook for the winter. A hedgehog, a ram, and a horse are also unsuccessful in pulling up the giant vegetable. Then a boastful rooster pulls on the turnip and it flies into the air, kicked by a mother bear trying to make more room in her underground den. This funny retelling of a Russian folk tale will keep young readers laughing. The pen and watercolor illustrations complement the story beautifully. Once a Mouse… by Marcia Brown Caldecott Medal Ages 4—8 The mighty tiger challenges anyone to say he was once a mouse, but the hermit knows it to be true, since he himself used magic to transform the mouse into a cat and then a dog and finally a tiger.

And unfortunately for the too proud tiger, those changes can be reversed. Beautiful woodcuts illustrate this Indian fable. Me and You by Anthony Browne Ages 4—8 Two parallel storylines tell the story of a lost little girl and a contented bear family. While the little blond girl becomes separated from her mother on a busy city street, the small bear and his parents visit a neighborhood park while waiting for their porridge to cool. The lost girl enters their cozy house, but flees when the bears return. Luckily her mother is right outside, and both families end up safe and sound and together.

Brave Chicken Little by Robert Byrd Ages 4—up In this version of the classic folktale, Chicken Little is sent of to the market to buy honey, flour, and milk. When an acorn hitting his head convinces him that the sky is falling, he gathers a group of friends included Henny Penny, Roly and Poly Moley, and Froggy Wogg and sets off to warn the king.

Captured by a clever Fox, they are imprisoned but make their escape by throwing apples at the Fox, convincing him that the sky is falling.

Plain Alice is the bookish daughter of a sage who longs to continue in his footsteps but is kidnapped by a dragon in a case of mistaken identity. Princess Alice, heir to the kingdom of West Stahope is pursued by the treacherous Duke Geoffrey who hopes to take over the kingdom by marrying her. Together the three fight against their dangerous foes, learning that a combination of logic and bravery is the best defense.

This alternative fairy tale is great fun. The hunter is so small in comparison that Inukpak believes he is a child, and adopts him. Inukpak feeds the hunter a whale, which he sees as a small fish, and makes him a shelter from his boot. The hunter accepts his fate and becomes friends with the giant. This retelling of an Inuit folktale features uniquely Arctic scenery. But Ming trades the eggs for a singing wok who promises exciting things. The clever wok also transports toys from the greedy rich child, and treasures from the dishonest rich father.

Based on a Danish folktale, this jaunty tale will enchant young listeners. Born a hedgehog from the waist up, Hans becomes an accomplished fiddle player and loves riding his rooster through the woods with his faithful hogs. After rescuing two kings and visiting their castles, Hans finally meets a princess who loves him as he is. This adaptation is a much happier version of the original fairy tale. Chanticleer and the Fox by Barbara Cooney Caldecott Medal Ages 4—8 Chanticleer the rooster falls for the flattery of the fox and is caught.

Beautiful pen and ink drawings illustrate the fable. Deep in the Woods by Christopher Corr Ages 3—6 Deep in the woods a mouse discovers a wonderful little house with nine windows and a red front door. The mouse moves in and wen other animals and birds pass by he invites them to move in. 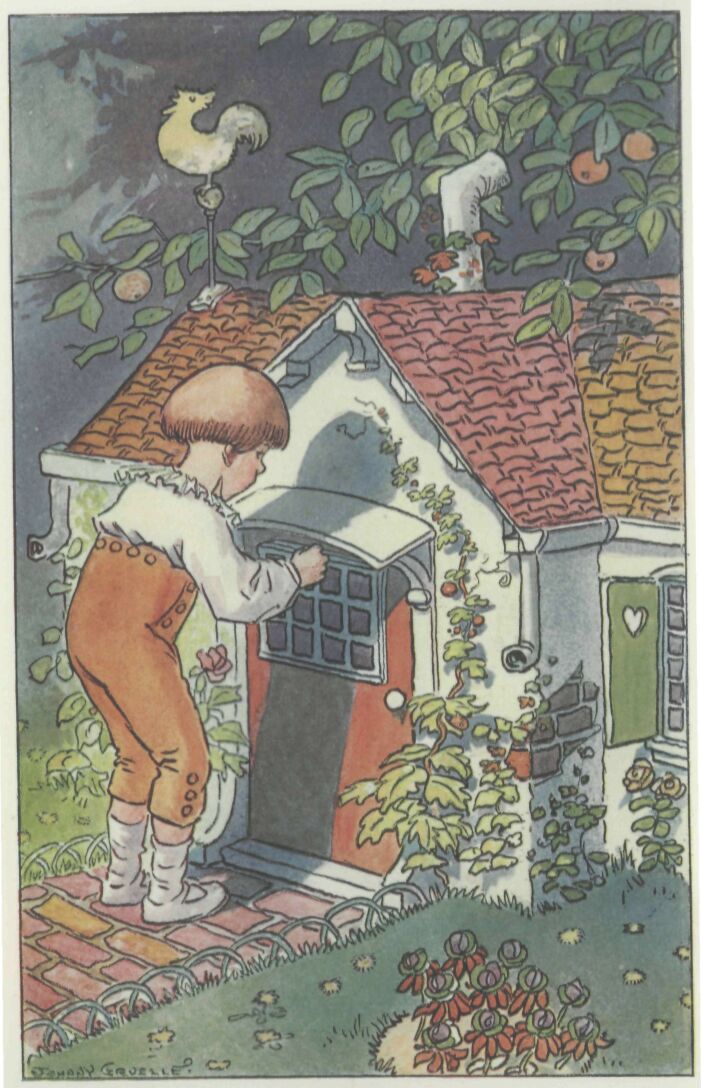 All is well until a gigantic bear appears and destroys the roof. Everyone, including the bear, join together to repair the house. This modern retelling of the classic Russian folktale celebrating of friendly cooperation is beautifully illustrated. Eight Favorite Fairy Tales by Lucy Cousins Ages 4—10 In the retelling of these fairy tales, the villains are scary and eager to eat their tasty prey. Bold and vibrant illustrations complement the slyly humorous text. Classic tales like Cinderella , Snow White , Sleeping Beauty , and Hansel and Gretel , have a more modern feel while brief introductions describe the themes, symbolism, and contemporary relevance of the stories.

This beautiful book will appeal to readers of all ages. Jack by Tomie dePaola Ages 3—5 Young Jack tells his grandfather that he would like to see the world, make new friends, and live in a house in the city. His grandfather encourages him to go to the city and ask the king for a house. Along the way Jack collects a cheerful and noisy bunch of animal friends. Luckily the king provides a house big enough for them all. Entwined by Heather Dixon Ages 12—up Azela, the heir to the throne, and her 11 sisters live in the half-magical world of Eathesbury.

When their mother dies after a long illness, their father the King banishes the girls from his sight and goes off to war without even saying good-bye. The sisters find a secret passageway to an enchanted pavilion under the castle, where they dance all night, breaking the rules of mourning.

Fable Comics edited by Chris Duffy Ages 6—12 Twenty-eight fables are retold by 26 talented graphic artists in comic format. Many of the fables are classics from Aesop, but some are more obscure. Though based on the originals, each enjoys artistic freedom as long as there is a moral at the end.

The King and His Daughters - Fairy tales and stories for children

Classic Tales Told by Extraordinary Cartoonists edited by Chris Duffy Ages 6—12 Seventeen classic fairy tales are adapted and illustrated in comics format by seventeen different cartoonists. The Girl Who Wanted to Dance by Amy Ehrlich Ages 6—10 Clara, who longs to dance, lives with her sad father and loving grandmother who tells her that her absent mother also loved music and dance. This haunting fairy tale compassionately addresses the irresistible artistic urge and the pain of those left behind. Riding along the trail on her ATV, Roja meets a wolf who steals her cape to fool Abuelita into letting him into the house.

But Abuelita is as clever as her granddaughter and the two deal handily with the wolf. The Ant and the Grasshopper by Rebecca Emberley, Ed Emberley Ages 4—8 As a hard-working ant is carrying home a watermelon slide, she takes a break to enjoy a cheerful grasshopper making music with his band. The ant is rejuvenated by the music, but refuses to stop and join the band. So the grasshopper and his friends play the ant all the way home, making her work much more enjoyable, adding a joyful note to the classic tale. The Princess and the Pig by Jonathan Emmett, Poly Bernatene Ages 4—8 Because of a mix-up in the royal nursery, Priscilla the princess has accidentally switched places with Pigmella the piglet.

This hilarious fractured fairy tale will delight young readers. First Light, First Life: A Worldwide Creation Story by Paul Fleischman, Julie Paschkis Ages 6—9 Elements from creation stories from around the world are woven together into one whole, highlighting their similar story lines.

Each page represents a different country or culture, celebrating both our commonalties and our differences. Too poor to buy her a present, Jack cleverly decides to bake her a cake, trading for the ingredients. But on the way to the party the cake is slowly demolished by a variety of creatures and disasters, so Jack arrives at the party empty-handed. Each story includes short details about the main characters, and famous and memorable quotations from the play. See all Usborne Shakespeare books. Home Catalogue Classic stories and fairy tales.